– The uncrowned king of spirits! The spelling was until the beginning of the 20th Century uniform ‘Whisky’ in all the whiskey-producing countries. Then some distilleries in Dublin began to name their products ‘Whiskey’ to distance  hemselves from their Scottish competitors. Generally write the Scots and Canadians ‘Whisky’ without ‘e’ and the Irishman and most Americans favor ‘Whiskey’.

Why the whiskey is considered the king of the fine spirits? There is no other distillate, which offers such a wide range of different flavours. From country to country, region to region, the whisky is very different. The American whisky must be distilled by law at 51%  of corn, however, there the Scottish or Irish malt whisky is maded by 100% malted barley. Only for all whisky is mandatory that they are produced as a distillate of grain, yeast and water to then be stored for a period of time in wooden
barrels.

As the Celtic name uisge beatha = water of life – suggests, whisky is an elixir of life and have always found its application in medicine. There is now scientific evidence that drinking 10 cl weekly, may reduce the risk of heart attack. Whisky and the Celtic culture are closely linked, therefore in many legends is spoking about it and give him something magical.

An old Scottish proverb says that whisky could change a negative into positive mood….

In this sense – here’s to you! Nobody knows for sure who was the first to have the simple yet wonderful idea to transform plain barley into a  precious spirit. There is agreement, however, on the fact that it is an inheritance of Celtic ancestors. The obtained spirit was regarded as a vital protection from wet autumn weather and icy winters with lots of snow – it was called uisge beatha, the water of life. No doubt, the process of distillation is an art which was cultivated in its origins in remote highland glens as well as in the monasteries of the lowlands. Today, more than 500 years later, Scotch Whisky is long-established as a gift of nature to epicures all over the world. In the same way as nature itself, it emanates from fire and water, and with proper care it vastly improves over time.

The 3 main components for producing malt whisky can be found in nature;

Peat is abundantly available as a natural fuel, consisting of decomposed marsh plants such as moss, heather and sedges. Burning peat creates the smoke which is used for stopping the germination process of the barley which is spread out on a wooden floor above the fire. After drying, the barley is merged with water in a large copper pot, thus producing the so-called mash. The addition of yeast triggers the fermentation process – alcohol develops. Up to this point, the production of whisky is identical to that of beer! Then the alcoholic mixture passes the copper still for the first time. Strong heat transforms the alcohol into rising vapours which subsequently condense resulting in the so-called low wines. The distillation process (heating – cooling) is repeated, then the twice-distilled spirit is filled into wooden barrels for its final ripening. The duration of this barrel ripening can vary, yet it has to be at least 3 years, otherwise the spirit may not be called whisky! Scotch is derived from Scottish and designated actually only the origin of whisky.

A strict legal definition of Scotch Whisky has been in place for many years. Today, Scotch Whisky is defined in UK law, and also protected at European Union and World Trade Organisation level as a recognised ‘geographical indication’.

This legal protection is vitally important. It protects Scotch Whisky from unfair competition and underpins Scotch Whisky’s reputation as being of the highest quality and integrity.

which has been distilled at an alcoholic strength by volume of less than 94.8% so that the distillate has an aroma and taste derived from the raw materials used in, and the method of, its production;

which has been wholly matured in an excise warehouse in Scotland in oak casks of a capacity not exceeding 700 litres, the period of that maturation being not less than three years;

which retains the colour, aroma and taste derived from the raw materials used in, and the method of, its production and maturation, and to which no substance other than water and plain caramel colouring may be add

Also the Scotch must have an alcoholic content of 40%.

Malt is won from malted barley and is the raw material along with water and yeast for the production of malt whisky. He’s mostly distilled several times in a copper pot. Unlike Single Malt, it may contain distillates of different distilleries

For having the name Single Malt Whisky on the labelling can be only used malted barley whisky from a single distillery. Before bottling, usually selected barrels of the distillery are mixed together or married in the brands language. So, the Blend Master can affect its flavour and its taste. In the name must always be the age of the youngest whiskey this mixture are given. This can but unrestrictedly also older whiskey contained. Each Single Malt bottling therefore has its own individuality. Is recommended to enjoy Single Malt Whisky pur or with a few drops of water, so that his variety can develop fully.

Other Types of Whisky

Other Types of Whisky Single cask is bottled from a single barrel.

Vatted malt is a mixture of malt whiskies from several distilleries.

Pure malt is a seldom used term since its meaning is not entirely clear. In some cases it is used to designate a single malt, in other cases it stands for a vatted malt.

Grain whisky is produced on an industrial level in large, permanently producing, pillared stills. Common components are maize, wheat and raw barley, and the spirit has to ripen for at least 3 years in oak barrels.

Blended scotch whisky or, in short, blends are the result of a stroke of Scottish genius at around 1830 – 1850. Blended is a mixture of a small quantity of single malt and a large amount of grain whisky. Blends made it possible for less wealthy people to afford whisky, and thus the success story of Ballantine’s and Johnny Walker began. The Scottish malt whiskies are subdivided according to 3 regions of origin.

Each region contributes with its specific factors to influence the taste of the whiskies produced there – even in a blind tasting you can usually ascertain from which region the single malt originates.

Lowland whiskies are light in taste, with a light body, herbal and citrus aromas. One of the better-known Lowland distilleries, Auchentoshan, is the only one to continue the Lowland tradition of three-time distillation.

The Highland region of Speyside is commonly called the heartland of whisky production. It is the home of more then half of all the malt whisky distilleries of Scotland. A Speyside malt usually tastes of sherry and honey; it is floral and mostly very complex. Some remarkably fruity whiskies, such as the Aberfeldy, originate in the eastern and southern Highlands. In the north you can find whiskies with aromas of heather and spice, probably stemming from the sandstone which dominates in this region.

The Isles whiskies are all characterised by their extremes –  they are peatier, saltier, smokier, more iodinous… These strongly pronounced aromas can be explained by the proximity of the sea and the intensive climatic influences associated with these locations. The largest and best-known whisky island by far is Islay with its seven operating distilleries Ardbeg, Bruichladdich, Bunnahabhain, Bowmore, Caol Ila, Lagavulin, and Laphroaig. An eighth, Port Ellen, has, however, been closed for some years. Japanese Whisky is known a few years ago in our country. Impressed by the world-wide success of whisky, the Japanese began producing their own brands in 1923. The Japanese have learned and perfected the knowledge about the burning skill of the Scots.

Blends are the most produced, very often they are mixed with Scottish Single Malt to improve the quality. Actually, this wouldn’t (more) necessary, because especially the Japanese single-barrel bottlings are the Scottish into nothing more. Maybe of the aged japanese code which practically forbids the acquisition of products in the own country to make or complete the inhouse products – so it’s rather to importe than to cooperate. Therefore some Scottish and American distilleries are in possession of the Japanese.

Two of the most influential figures in the history of Japanese whisky are Shinjiro Torii and Masataka Taketsuru. Torii was a pharmaceutical wholesaler and the founder of Kotobukiya – later to become Suntory. Torii hired Masataka Taketsuru had studied the art of distilling in Scotland, and brought this knowledge back to Japan in the early 1920s. Whilst working for Kotobukiya he played a key part in helping Torii establish the Yamazaki Distillery. In 1934 he left Kotobukiya to form his own company—Dainipponkaju—which would later change its name to Nikka. These are two best-known Japanese distilleries.

How the Scottish Malt also the Japanese whiskey is divided into malt, pure malt, grain and blended whiskey.

In the 18th century, there were more than 2000 distilleries in Ireland. At present there are only 3 in operation. In Ireland there is no peat used for whisky production, except for the Connemara Malt. In contrast to Scottish whisky which is only distilled twice, the Irish whiskey is distilled three-times (except for the Auchentoshan malt whisky). The Irish spell their whiskey with ‘ey’ in order to distinguish it from Scottish whisky.

As with Canada, it was the European immigrants who brought the art of whisky production to the New World. In the course of the decades, the traditional Irish and Scottish distilling methods were altered, and ingredients such as maize, rye and wheat were preferred to traditional barley. As with the Irish, American whiskey is also spelled with ‘ey’.

Among the so-called exotic whisky countries, we would like to highlight New Zealand, India and Switzerland in particular. In both countries, proper single malt whisky is produced, if only in small quantities and not only blends. 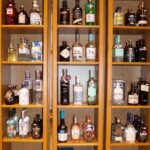 Gin is mostly colourless and is made from grain or molasses and usually gets its flavour from the addition of juniper berries and coriander or other spices.  Gin got its name in England in the 17th century, when the French and Dutch brought a schnapps called “jenever” with them.

Today we basically distinguish between 5 types:

Gin is the main ingredient in many cocktails, including Gin Tonic, Gin Fizz, Martini, Basil Smash, etc, but can also be enjoyed neat if it is of high quality.